Medic Quotes    6:45 PM    Disease , Health
Angioedema is a swelling that often results from an allergic reaction. This condition is usually not dangerous. However, in rare cases, angioedema can cause the sufferer to breathe, because swelling occurs in the respiratory tract. 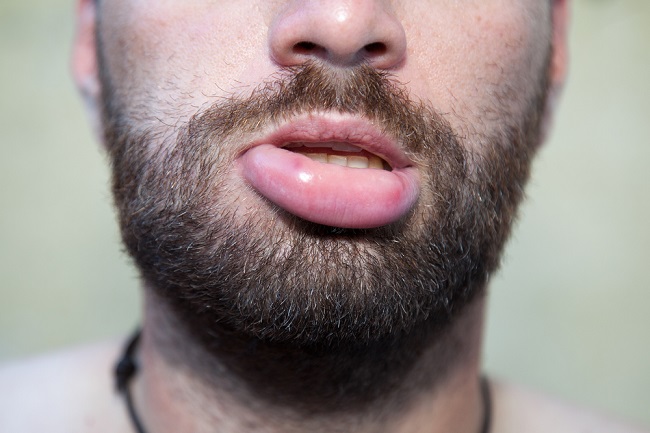 In some cases, angioedema sufferers also experience urticaria or biduran . Both conditions look the same. The difference is that swelling in angioedema occurs in the lower layers of the skin. While swelling in biduran occurs on the surface of the skin.


The main symptom in people with angioedema is swelling under the skin surface. This swelling is caused by a buildup of fluid in the inner skin layer, and can occur in several body parts such as the area around the eyes, lips, tongue, hands, feet and genitals. In severe cases, swelling can also occur in the inside of the throat and stomach.

Swelling due to angioedema usually does not cause itching. But in idiopathic angioedema and allergic angioedema , swelling can be accompanied by hives or urticaria, which feels itchy.

A number of other symptoms that can occur include :


In someone who has angioedema due to heredity, other symptoms that can appear are :


Immediately see a doctor if you experience symptoms of a severe allergic reaction (anaphylaxis), such as swelling in the tongue and throat which results in complaints of hoarseness, wheezing to shortness of breath.


This angioedema results from an allergic reaction, including :


A person can develop angioedema due to the use of certain drugs, even if he does not have a drug allergy. Swelling can appear shortly after using the drug, it can also appear several months or years later.
Some types of drugs are :

Swelling can be triggered by a number of conditions, such as :


Someone who suffers from this type of angioedema is at risk of reducing this disease to his child.


In addition to the above factors, the majority of cases of angioedema are unknown. Experts suspect that this condition is associated with a breakdown in the immune system.

Swelling in idiopathic angioedema can be triggered by a number of conditions :


Angioedema can occur in anyone. However, a number of factors can increase a person's risk of developing angioedema, including :


To diagnose angioedema, the doctor will see the area of ​​swelling in the patient's body, and ask what symptoms the patient is experiencing.

If the doctor suspects that the patient's angioedema is caused by an allergy, then the doctor will run an allergy test . Allergy tests can be done in two ways, namely :


Blood sampling is also performed on patients suspected of having hereditary angioedema . Through examination of the patient's blood sample, the doctor can find out whether the patient lacks C1 esterase inhibiting protein.


Angioedema that causes mild symptoms, is enough to be handled with self-care at home. Some treatment steps to help relieve symptoms, including :


Handling of allergic angioedema and idiopathic angioedema uses the same method. One way is to avoid allergenic foods. Doctors will also prescribe antihistamine tablets and corticosteroids to relieve swelling. If the swelling lasts for several days, the doctor will inject corticosteroids .

As for patients who experience symptoms of anaphylaxis (severe allergic reactions that are life-threatening), the doctor will give an injection of adrenaline or epinephrine .

In patients with drug-induced angioedema , doctors will recommend other types of drugs, to replace the drug that triggers the symptoms. Handling with drugs is also used in patients with angioedema, to prevent and treat swelling.

Swollen prevention drugs commonly used include danazol and tranexamic acid . As for treating swelling, the doctor can prescribe a replacement drug for C1 estrase inhibitors. The drug will be given as an injection, to increase levels of C1 estarase protein in the blood.