Medic Quotes    6:45 PM    Cancer , Tranding
The death of Beau Biden from brain cancer at 46 brings to a light a rare, but lethal disease that remains stubbornly resistant to treatment.

With mourners gathering in the Delaware Senate to pay their respects Thursday, the death of Vice President Joe Biden's oldest son Beau at 46 from brain cancer brings to a light a rare, but lethal disease that remains stubbornly resistant to treatment. 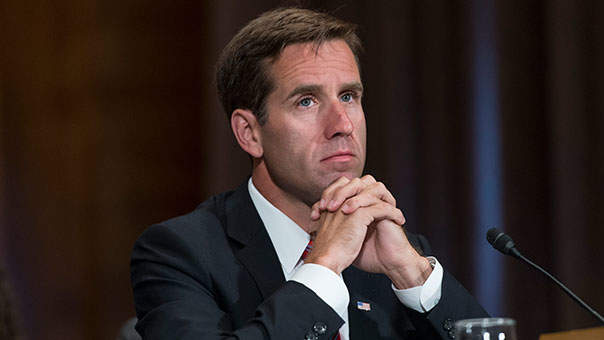 Beau Biden was originally diagnosed back in 2013. After surgery, chemotherapy, and radiation, he went back to work as Delaware's Attorney General and even had plans to run for Governor in 2016, according to the Washington Post. Sadly, he suffered a recurrence this spring, and his health quickly deteriorated.

The Biden family has not released specifics about his diagnosis. But one common type is the glioma, a broad category of tumors that arise in the brain from glial cells, which are  cells that are wrapped around neurons throughout the central nervous system. The most common and most deadly type of glioma is called glioblastoma, which can be very aggressive in the final stages.

While death rates from many cancers have declined thanks to better prevention, screening, and treatment, with the overall cancer death rate among Americans falling 22% between 1990 and 2011, death rates from glioblastoma remain virtually unchanged, says Dr. Adilia Hormigo, director of the Neuro-Oncology Program at Mount Sinai and Mount Sinai Health System. “The progress has been very limited; we're kind of stuck with the same treatments.”

Part of the reason for this, according to Dr. Hormigo, is that the disease is so rare that there hasn't been a big commitment on the part of pharmaceutical companies to fund development of new treatments. “It's an orphan disease,” she added.


“Surgery is the backbone of therapy for most gliomas, because you get a diagnosis and then you take out a good portion of the tumor,” says Brian Alexander, MD, director of CNS radiation oncology at the Dana Farber Brigham and Women's Cancer Center in Boston.

But glioblastoma grows very quickly, and is rarely fully eradicated with surgery. “For adults, most of the time, the tumors will come back,” Dr. Alexander says. “Glioblastomas progress within months or even days if you don't treat them after surgery.”

First-line treatment of brain cancer typically involves surgery to remove as much of the tumor as possible, followed by radiation and chemotherapy with the drug temozolomide. Once radiation therapy is complete, patients continue taking temozolomide for another six to 12 months.

But even with this state-of-the-art treatment people live an average of just 14.6 months after being diagnosed with glioblastoma, according to Dr. Alexander. And just 33.3% of patients with all brain or nervous system cancers will survive past five years, compared to a five-year survival rate of 89.4% for breast cancers, according to the NCI.

Certain genetic profiles, for example those who have an inactivated MGMT gene in their tumors, have slightly better odds, Dr. Hormigo says.

And “of course you always have exceptions, I have had patients living eight years and patients who passed the 10 years margin, I think we all have,” she adds. “We give hope to the patients based on those cases.”

There are also a few hopeful treatment possibilities on the horizon, she added, including immunotherapy and even alternating electric field therapy, also known as tumor treating fields (TTF), a controversial treatment involves placing electrodes on a patient's head and exposing cancer cells to electromagnetic waves.

Who gets it and why


People can be diagnosed with brain cancer at any age; it's slightly more common in men than women.
The only known risk factor for the disease—aside from a handful of rare genetic syndromes—is ionizing radiation, according to Dr. Alexander. “Most of the patients that come in don't have the genetic syndromes or exposure to ionizing radiation,” he added. “Most of the time, it's unknown what causes it.”

Different types of brain cancer and their symptoms


There are more than 100 types of brain tumors, and not all types are as lethal as glioblastoma. For example, brain metastases, meaning tumors that have spread to the brain from elsewhere in the body, are about ten times as common as tumors originating in the brain, and may be easier to treat.

Meningiomas are tumors that form in the membranes surrounding the brain and are benign; these can sometimes be cured with surgery in the early stages. Meningiomas tend to grow slowly, and may not cause symptoms at all.

Aggressive brain cancers, on the other hand, can cause a host of symptoms, based on where they are located in the brain. These can include headache, seizures, sensory and movement problems, and changes in mental function or personality. And as the disease progresses, patients may have trouble speaking or walking or have other disabilities.

“It's difficult in all aspects,” Dr. Hormigo says.