Medic Quotes    1:35 PM    Cancer
Cancer is a disease characterized by uncontrolled cell growth, which has the ability to infiltrate and damage healthy cells in the body.

Each body cell has a control center called the nucleus. The nucleus consists of a series of DNA chains that function as a regulator of the nature and workings of each cell, including to divide. 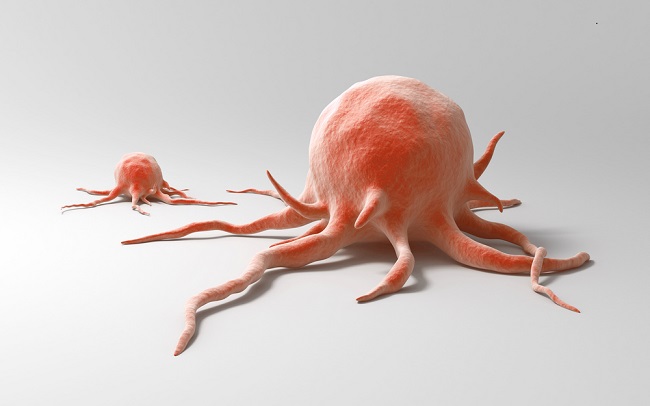 Normally, the cell will divide according to a predetermined time and with genetic traits in normal cells. But in the event of a mutation in the cell, the cell's genetic information in the DNA chain is damaged, double-printed or even lost, during the process of cell division. In cancer, there is a mutation in which cells will divide too much to form tumor tissue.

Based on the type of cell that is attacked, cancer can be divided into 5 groups, namely:


In addition to these groups, cancer is also divided according to the organ from which the cancerous tissue originates such as lung cancer or breast cancer.

The main cause of cancer is the mutation of DNA in cells, so cells break down at speeds exceeding normal. Finally, there is a buildup of new cells that are not needed by the body. These new cells will continue to grow into adulthood and then divide again, and so on.

In addition, mutations also occur in genes responsible for repairing DNA damage. Normally, this gene serves to see what abnormalities occur in the cell's DNA, then fix them. Because the gene is mutated, this gene is not able to repair the abnormalities that exist in cells until eventually, the cells become malignant.

There are several factors that can cause mutations in normal cells, and can originate both inside and outside the cell.
Mutations originating from cells are generally obtained genetically from parents. While the causal factors from outside the cell, the most common is exposure by substances that can trigger mutations (mutagen).

Some substances included in the class of mutagens include:


Mutations due to external factors can also be caused by other factors such as obesity, chronic inflammation and lack of physical activity. In general, external factors are more risky to cause cells to mutate compared to internal factors.
Risk factors that can increase a person's chances of getting cancer are as follows:


Symptoms that arise due to cancer vary greatly depending on the type of cancer that is experienced and the organs affected by cancer. Some of the common symptoms experienced by cancer patients are:


If you experience these symptoms, especially symptoms that persist for a long time, it is recommended to immediately consult a doctor. Risk factors and a history of cancer in the family also need to be consulted so that routine screening checks can be carried out so that cancer can be diagnosed early.


The earlier the cancer is diagnosed, the greater the chance of recovery for the sufferer. Because it is highly recommended for people who are at risk of developing cancer to consult a doctor regarding their risk factors. Some of the cancer diagnosis steps that doctors generally make are:


After the tests are done and the patient is confirmed to have cancer, the doctor will determine the level (stage) of cancer. In general, the division of cancer stages is as follows:

Some doctors call this condition a non-invasive cancer. Carcinoma in situ is generally difficult to detect due to its very small size, except in places that are easily visible (for example on the skin). Several types of screening tests can also detect carcinoma in situ in the breast or cervix.

Determination of the level of malignancy and the spread of cancer is a very important part of the diagnosis of cancer because it will determine the type of treatment that is most effective for patients.

The main goals of cancer treatment are as follows:


There are various methods of cancer treatment, which are chosen based on the type and level of cancer malignancy suffered by the patient. The commonly used methods are as follows:

Like the treatment of other diseases, cancer treatment has side effects on the body. One side effect is lowering the number of blood cells in the body and slowing down blood production.

However, a cancer treatment that is being undertaken can slow down the regeneration process of white blood cells. This condition can weaken the patient's immune system so that patients are more susceptible to secondary infections due to the weak immune system.

Platelets (platelets) can also decrease due to cancer treatment. Symptoms of decreased blood platelets can be observed from the occurrence of nosebleeds, bruises or red rashes on the skin. These side effects can be overcome by giving platelet transfusions to patients. Generally, after the patient has received chemotherapy in the long term, platelets take longer to increase to normal amounts than other blood cells.

How Cancer Can Reappear (Relapse)


Cancer can reappear to someone after treatment in cancer patients. Some of the recurrences of cancer are explained as follows:

The surgeon who performs cancer removal in the patient will make every effort to eliminate all cancer cells. But there is still a possibility that a small percentage of cancer cells are left in the patient so that they can reappear and cause relapse. To overcome this, doctors will recommend additional treatment after surgery so that all cancer cells can be killed. Additional treatment can be in the form of chemotherapy, radiotherapy, immunotherapy, and hormone therapy.

In order for cancer treatment given to patients to kill cancer cells as much as possible, patients will generally be given a combination of several therapies.

In some cases, cancer cells can be resistant to the treatment of cancer making it more difficult to treat. Cancer cell resistance arises due to mutations that occur in cancer cells continuously so that the cell's genetic properties change. If this happens, the doctor will provide several types of treatment combinations to the patient. In some rare cases, after a combination of treatments cancer still has resistance. This condition is called multi drug resistance.


Some things that can be done to prevent cancer are as follows: