Medic Quotes    2:45 PM    Cancer , Health
Melanoma skin cancer is a type of cancer that develops in melanocytes, skin pigment cells that function as a producer of melanin. Melanin is what functions to absorb ultraviolet light and protect the skin from damage. 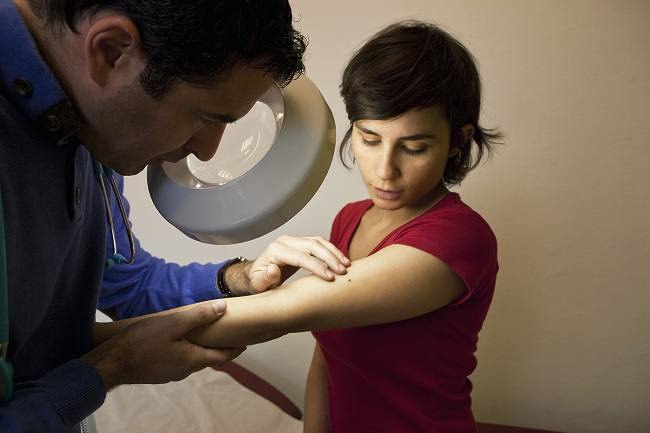 Melanoma is a rare and very dangerous type of skin cancer. This condition starts with human skin and can spread to other organs in the body.

The appearance of new moles or changes to existing moles is usually a common sign or symptom of melanoma. This can occur throughout the body, but some parts of the body that often appear are:


Melanoma has an irregular shape and more than one color. Moles affected by melanoma can be itchy and can experience bleeding, besides, the size can also exceed normal moles. To distinguish between normal moles and melanomas, the ABCDE list has been developed for people.

The risk of melanoma is greater in women under the age of 40 years. This type of skin cancer can be fatal if not diagnosed early.


Melanoma occurs when skin pigment cells develop abnormally. Until now, it is not yet known why this happened. Some people who think the cause of the emergence of melanoma is because the skin is too often exposed to natural or artificial ultraviolet (UV) rays. But apparently, not all people who are often exposed to UV become sufferers of melanoma.

The researchers are still trying to find out the cause. Some of the factors that are known to increase the likelihood of contracting melanoma are having lots of moles or spots on the skin, pale and flammable, having family members suffering from melanoma, and those with red or blonde hair.


Doctors can diagnose melanoma after a physical examination. Your doctor will refer you to a dermatologist or plastic surgeon if they think you have melanoma. So if you see a change in the shape of a mole, see a doctor immediately.

In most cases, tissue moles that are considered suspicious will be removed surgically and studied whether they have become cancerous. This process is known as a biopsy. Whereas to check whether the melanoma has spread to other parts of the body, sentinel node biopsy procedures can also be done.


One of the main procedures for treating melanoma is surgery, although all types of treatment are done depending on your condition. Surgery can be successful if melanoma is diagnosed at an early stage.

But, to prevent melanoma from reappearing, you must undergo further treatment. If the melanoma is not diagnosed until the most severe stage, treatment can only slow the spread of cancer and relieve symptoms. At this stage, drugs are usually needed, such as chemotherapy.


It is possible that melanoma will return if you have had melanoma before. If cancer has spread and is severe, your risk of being hit again will increase.

You may have to do regular checks to monitor your health, especially if your cancer treatment team feels that there is a high chance that the melanoma will reappear. How to check if there are tumors in your skin and lymph glands, will usually be taught by the team of doctors on duty.


You can reduce the risk of melanoma by avoiding the skin from being exposed to direct exposure to ultraviolet light, both natural and artificial, although the appearance of melanoma cannot always be prevented. One prevention of melanoma that is easy to do is to use a sunscreen and wear complete clothing to protect the skin from damaging sun exposure.

To increase the success of treatment and to get a diagnosis from the start, you are advised to check moles and spots regularly.