Recognize the Stethoscope Parts and Their Functions

Medic Quotes    8:01 PM    Family , Health
A stethoscope is an examination aid commonly used by doctors. This tool serves to listen to sounds from inside the body, one of which is to hear the sound of a heartbeat and detect abnormalities.

In addition to hearing the heartbeat, the stethoscope can also be used to listen to other sounds from inside the body, such as breathing sounds or intestinal sounds (bowel sounds). The type and intensity of these sounds can help doctors determine the diagnosis and assess the patient's condition. 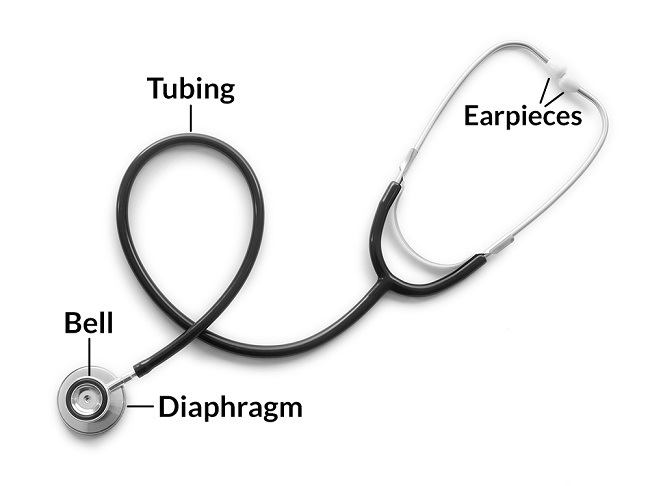 
Earpieces are part of a stethoscope that is attached to the ear to hear sounds from internal organs. Generally earpieces are made of soft rubber material. In addition to being more comfortable and not painful when worn on the ear, rubber material can also help reduce noise from the outside.


Tubing is a part of a stethoscope that is a thin and long tube shaped like a hose, which serves to channel sound from the diaphragm or bell to the earpieces.


Diaphragm or diaphragm is a part of a thin and flat membrane at the end of the head of a stethoscope, which is made of plastic circular plates.

This diaphragm has a special function for listening to sounds or high frequency sounds, such as the sound of wheezing in the lungs. Some types of stethoscopes only have a diaphragm, while others have a diaphragm and bell.


Bell is the last part of the stethoscope that is circular and attached to the back of the diaphragm. The size is smaller than the diaphragm. Bell functions to listen to sounds or low frequency sounds, such as heart sounds.

In general, the stethoscope serves to listen to the sound of the heartbeat , so that it can be seen whether the heart is beating properly and has a normal or not rhythm. The results of this examination can be used as a benchmark for assessing heart health conditions.

In addition to hearing the heartbeat, the stethoscope also functions to hear lung sounds. Examination of the lungs with a stethoscope is done to assess whether breathing sounds are normal or not.

Not only that, the stethoscope can also be used to examine the abdominal area. Usually a stomach examination with a stethoscope is done to hear sounds or bowel sounds. Increased or decreased bowel sounds can be an indicator of digestive disorders.

The stethoscope is not just an object that complements the doctor's appearance. This tool must be owned by a doctor because it is very useful to help doctors diagnose patients' diseases.